At the end of my month off blogging, my husband and I took a trip to South Padre Island. 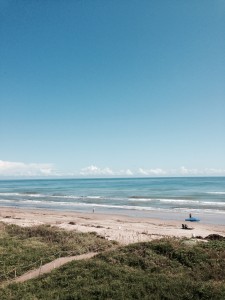 I did bring my computer, but I didn’t use it except for one work email. I brought my poetry journal but didn’t even open it. Mostly I watched birds and waves and collected shells—177 of them.

When I was a child and our family went to the beach, I collected shells, but I don’t remember finding them in this many colors. Forty-two are autumn shells: yellows and browns and even a little orange. Another 16 looked black when I picked them up, but they’ve dried to gray. Two dozen are striped blues. Thirty-one are more traditional white and variations of white. All the shells I just described are what’s known as Atlantic Cockles, although I also have several broken abalones.

“What are you going to do with those?” my husband asked.

I still don’t know. It just seemed important to save them. It was our first trip alone in two-and-a-half years, our first time to go to the coast by ourselves. I can’t save the sound of the waves or the smell of the salt, but I can save these shells.

Unfortunately, I do not own a glue gun or any crafting materials that could be used to make the shells cute. I really don’t do cute. I can write a poem about things, but I don’t know what to do with actual things I can hold in my hands.

Maybe no one else would find my shells as spectacular as I do. If they were in a museum, the exhibit would be labeled “Common Texas Gulf Coast Shells.” But I found each one. I got more sun while bent over the sand, picking up shells, than I did in the water. I can remember finding the speckled one, the one with three hues of gray, the one that looks like a latte—complete with a milky swirl. They’re mine. I’ll figure out something.